Tritia Toyota, Ph.D., award-winning broadcast journalist & adjunct professor of Anthropology and Asian American Studies, interviewed 2007-2008 IAC Visiting Scholars, Ellie Hernández, myself, and Amy Sueyoshi, about our research projects. (Dr. Winton was unable to attend the IAC Fall Forum as she was researching and teaching in Ghana)

At that point, my project was called "The Light from Carissa Plains: Reinventing California Indian Identity." It has since come to be titled "Bad Indians: A Tribal Memoir." This interview gives you a good idea of the project's scope, even then, when I was still figuring it all out.

Please note: At the interview, I was so nervous that I said J.P. Harrington's consultant was named "Isabel Ramirez," confusing Isabel Meadows and Laura Ramirez. Ooops!

To view: lick on the photo below [you'll need RealPlayer]; the link takes you to the IAC website.  Once there, scroll down to the second interview. Click "view Deborah Miranda interview."  Enjoy! [I'm aware that the link hasn't been working, but IAC sent me a new link that fixes the problem.] 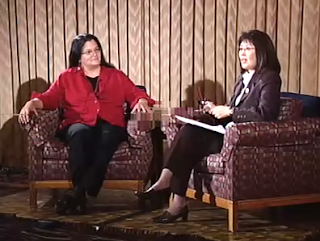