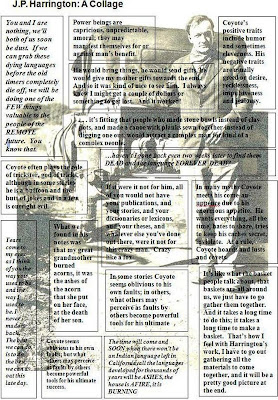 I've tried to write about Harrington for a long time. As many know, he was a complicated man full of paradoxes: brilliant with languages, determined researcher, clueless about human relationships. His obsessive research includes intensive periods of time spent with both my grandfather Tom's tribe, Esselen, and my grandmother Marquesa's tribe, the Chumash. Thus, his material is a rare gift.

Yet I struggle with the way Harrington regarded his Native "informants" as his personal possessions, demanding that they not work with anyone else; the way many Native people felt used or cheated by him, valuable only until he'd squeezed every last Indian word or story out of them; and the manipulative twists Harrington used to get information out of reluctant consultants. For every story about Harrington treating consultants well there is a story for his callousness or racism or obsessive collection without regard for Native sensibilities. A truly psychological obsession with collecting Native information drove Harrington to treat himself, his family, and his consultants as inconsequential compared to the acquisition of Native languages, cultural materials, stories, etc. I've long suspected that he was a very high-functioning Asperger's case, and after reading his ex-wife Carobeth Laird's memoir about their life together, my suspicions are confirmed (I suggest Encounter With an Angry God: Recollections of My Life With John Peabody Harrington as an essential read for anyone using Harrington's notes).

And yet, these are the very behaviors which have preserved stories and people near and dear to me. How to reconcile this?

Maybe someday I'll find the right words to describe or talk about this man whose life's work has given me insight into some of my ancestors' lives, even as he exploited their suffering. For now, I've constructed a collage out of found material about both Harrington and the mythological being he has always invoked for me. It's hard to read as is; for a larger version, click on the collage. After that, you can also make the picture larger (E8: lower left-hand corner; FireFox, ctrl+).

One thing Harrington has done for me is bring into focus the truly paradoxical proportions of Coyote-energy!
4 comments: Links to this post