I inherited a bagful of cassette tapes featuring my paternal grandfather, Tom Miranda (1903-1977), a twentieth century descendant of the Carmel Mission Indians born just 67 years after the Missions were secularized (although it took another 10-15 years for the Missions to completely close down), and 33 years after it finally became illegal to buy and sell California Indians as slaves. Tom traveled all over the West Coast from the age of 14, curious and observant. He was born in the Monterey/Carmel area close to the Carmel Mission, but these tapes tell of journeys as far north as Seattle and back down into Mexico, even into the Midwest. He also traveled extensively through the infinite varieties of California terrain in search of work, good times, relatives, and often, I think, something he could not name.

His life story is definitely not just about being California, but being California Indian after a great holocaust: out of an estimated 1 million indigenous inhabitants, only 10,000 survived the Missionization era.

I never met my grandfather Tom, except as a baby. He came to my baptism in 1961 – showing up, typically of him, at my parent’s apartment early in the morning while my mom and dad were still in bed. My father tells the story in a tone of astonishment; apparently Tom had not come to any of his other grandchildren’s baptisms, but he was there with bells on for mine, and my parents scrambled to “get decent” and answer his loud knocking. But by the time I was 3, my father was in prison and my parents had divorced; by the age of 5, I had moved out of state and never saw Tom again, though a thread of contact remained, through a complex chain of relatives and, eventually, my father.

Tom died when I was 14 or 15, so some of these tapes are at least 30 years old, others older. I feel as though these tapes are his legacy to many – not just myself, but California Indians as a community – and also that his voice and his stories are gifts that bring him back to me. Listening, I’m amazed that he survived; I’m awed by how hard he works, how multi-talented he is, how naïve he is, how he masks his tenderness and affection for loved ones, the history he lives through, his perceptions about the U.S. Government and, as he calls them, “Americans” (warning: Tom also used racial designations common to his time and place – “Dago,” “Jap,” and so on. I did not edit these out.)

His stories about his parents and their parents before them remind me with painful but enlightening clarity how it is that California Indians lost so much culture, language, land, identity – and yet still have an identity and community, albeit often fragmented and/or reinvented.

This particular story came to mind yesterday, as I read about the 60th Anniversary of the Pearl Harbor bombing. My grandfather wasn't there - he was deep in his California world, working, trying to figure out those strange "Americans" and their crazy doings. This is what he told us about where he was on December 7, 1941. He was 38 years old, living away from his family (he and my grandmother had long since separated).

I rented from a German; George, he came from the old country when he was a little boy, he said. You know, he married one of those Cholon Indians; her name was Maggy.

One morning George came up to the house; it was when they had that big blowout at the Hawaiian Islands with the Japs. George came by one morning when an Indian boy, Bill, from Seattle was staying with me – he was working the same place as I was, working for Charlie Reagan –

Already everybody get up, we’re at war! The Japs bombed Pearl Harbor!

I said, Bill, did you hear that?

So we didn’t pay any attention.

George came by another time and he says, Pearl Harbor has been bombed by the Japs.

I’d never heard of Pearl Harbor, didn’t know where it was. By that time it was almost 7 a.m., we were still in bed.

George yelled, Get up, you guys, we need help today. They’s putting men across the bridge there with rifles and guns..

What the hell’s wrong, George? I ask.

Pearl Harbor has been bombed by the Japs!

I said, Who the hell cares?

Jesus Christ, Tom, get up, we have a war!

Where the hell is this war? I asked.

But George never took a drink in his life that I know.

You shoulda seen the clothes in his getup; a pair of old overalls that looked like the dog had got them, and he had an old shotgun. We was right on the bridge, our place was right on the end of the bridge there, a damn long bridge too, about a mile long. Jesus Christ, there I looked out at the bridge and God damn, there was about eight or ten men there with rifles and guns and everything.

I said Jesus Christ, has everyone gone mad, Bill? I guess they have! Have you heard any bombs of war, George?

And he said no, we never heard nothing, but they closed the bridge right up, you couldn’t use it anymore.

I thought, All these bastards have gone crazy.

Around 9:30 or 10:00 I said to George, Where the hell is the war, I don’t see anybody shooting! even though all those guys on the bridge had pistols in their hands, rifles and shot guns and everything. George said, We’re stoppin’ the Japs.

Well Goddamn, I said, there’s no Japs around here, I never saw one yet!

He says, Well there’s gonna be some comin’, we gotta kill them, hold them back you know.

Well, I went out that day and you know, they wouldn’t let me cross that bridge until about two p.m. in the afternoon. I wanted to go see my boss, Charley Reagan, see what he’s doing. I went over there finally – Bill wouldn’t go.

I asked Charley, What the hell’s going on? and he said, Ah, people has gone crazy. Somebody shot a ship over there in the Islands.

I said, What Islands? I had never heard of those Islands.

So I went back home, I asked my landlord George, What the hell is this with the Islands, what the hell have we got to do with this – let ‘em shoot each other!

It was the Hawaiian Islands. They caught the U.S. asleep all right. Why wasn’t this country prepared for something like this? I never knew anything about it till George woke me up. We didn’t go to work for three or four days; they wouldn’t let us cross the bridge. It seems to me if the Americans had those battleships in the Hawaiian Islands, wouldn’t they expect anything? What the hell, was we asleep or not!

Yeah, the big war, I guess it was. They sunk one of the biggest battleships the U.S. had. Boy, the Americans picked up those Japs right out of bed and took and put ‘em in camps. There were a lot of Japs around Salinas Valley; I bet the population was about 2000. They took every Goddamn one of them. They kept them prisoner for two or three years.

Well, until that time those Japs hadn’t even done anything yet. They put them up there in Northern California in prison there for three or four years until everything got quiet, and then they turned them out. There is something to me that doesn’t fit. Who the hell was our president then? Seems it was a set up. It was a put-up job.

The government can do some funny things. See, what they did after all that, they took ships down to the South Pacific, to the Mariannas; I know, ‘cause one of my boys was down there, Tom, and Alfred too, he was in Japan right after that. 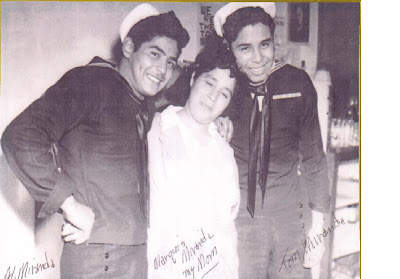 [Photo: Al Miranda, his mother Marquesa (Keta) Miranda, Tommy Miranda Jr., around 1940. My father told me this was taken at a restaurant his mother managed. You can see the "We reserve the right to refuse service..." sign behind them, and a portrait of FDR on the wall.]

I asked Alfred; he said, We never done a Goddamn thing, Dad; we sat in them caves in those Islands a month at a time, never heard a shot. What the hell were they doing?

And Tom was down on the Marianna Islands by the Philippines, he said, all we did was run all around on that ship; finally we got hit, and Tom damn near died, but he got over it. He was never in no hospital, just the one on the ship. Guess he got over it in three or four months.

And that’s all the war I ever saw, Alfred said, I never heard anything, Dad. They had I don’t know how many sailors there, locked up in the Islands in tunnels. Never heard a shot, just passing ammunition to someone else, we don’t know who it was – might’ve been the Japs!

Box after box, that’s all they did on them Islands, pass those boxes on.

Every once in awhile they’d bring us a bottle of whiskey. That’s where I learned to drink, Dad.

Those boys never knew what whiskey was. They was there about 18 months in those caves, right off the coast.

And then the war was over. The whole thing was a matter of money. This country and the Japs -- how could it get so big?

Yeah. I think there was a lot of dirty work there, dirty work.

[Parts of this story first appeared in News From Native California, Vol. 20, No. 1/Fall 2006]
No comments: Links to this post